I'm going to bring up a topic that I've brought up before. Because I feel it's important. Because you can be getting money back. I don't understand why more people aren't doing it.  No it's not a scam, I have cashed checks from them.

Let's see, you have along list of gifts that you need to buy for the upcoming holidays. You have to buy essentials, like clothes. Fortunately no one has ever actually tried to give me clothes as a gift. Or maybe a coffee-maker is essential for you to start your day off right. Now, what if I told you, that you could save more money than you already are. Yep, in addition to coupons.Whatever you need, before you shop, go to EBATES. Make an account. It would be very foolish of you not to make an account. You shop these stores anyways, to make it even easier, they have a browser app which you can install to your toolbar. Best thing ever, you won't even have to go to EBATES and click through them. If EBATES is associated with them, there will be a pop-up which you have to click to apply it to your order. EBATES will apply a tracking ticket to the sites you visit. If you make a purchase, you will get a whatever percentage that store is offering back. GO CHECK IT OUT NOW! I don't think I'm usually so forceful, compelling, or commanding. But what I don't understand is why people have not started using it. I thought everybody likes to save money and find the best deal. The voice of Unique Heart has spoken.

EBATES-online rebates and nothing to mail.

The way this site works is that they have a list of stores, that offer you a percentage back. Let's say your kid needs clothes. Go to EBATES and click on the clothing category. You will see a list of clothing sites with the percentage back that they are offering. Let's say you usually shop at Land's End. Scroll down the list of sites to Lands End and click shop now. An EBATES tracking ticket will pop open and take you to Land's End. Some sites even offer coupons in addition, just click on the store name before clicking shop now. Once you purchase an item, EBATES will send you a check or you can get it through paypal or even have it given to charity. What's not to like? Try it now, it's totally FREE to sign up and if you need to spend money, why not save while you're at it.

P.S.- If for some reason the above is not compelling enough,  but later on you decide to join or some friend convinces you better than I can. Then you can always come back and on my sidebar, there is a link which will take you straight to EBATES.

Posted by Unique Heart at Monday, November 26, 2012 No comments:

I was really in the mood of pasta today. I wanted either baked ziti or macaroni with cheese sauce. I ended up going with macaroni and cheese sauce for various reasons.

Macaroni and Cheese Sauce is quite easy to make, but there are no measurements.

Cook up the macaroni to your desired doneness.
In a small saucepan, pour  a bit of milk and add American cheese. Stir until you have a thick sauce. The thickness of the sauce depends on your preference, I like it a bit thick, but not too thick, if it gets too thick, add milk. Test it by dipping one noodle in the sauce and tasting.


I like it as is, but you can add nutmeg or even a little black pepper to the sauce.

Spoon sauce over pasta. There's more control this way, in the pictures mine has too much sauce for me at least, and that's because I dumped the pasta back into the pot with the cheese sauce. Obviously if you have a better eye for these things, or are making a lot more pasta than I did, it will work to put it back in the pot. My recommendation is to spoon it over. Also this time, I used the same pot for the pasta and the cheese sauce, but I sometimes use a saucier or a small saucepan-it depends on how much I'm making.

Easy Alternate Version: Here is where you get to see my kiddie taste buds, I sometimes put some ketchup on top of the pasta with cheese sauce and mix it together.

See Creamy Mac N Cheese Part 1 for a comparison between these 2 versions, or try them both for yourself and let me know how you like it in the comments section below.

Saw a recipe on pinterest for macaroni and cheese recipe that boils the pasta in milk. Boiling pasta in milk sounds good, doesn't it? I had some time, so decided to try it, but I adapted the recipe a bit. Googling it, turns up quite a few versions, which are all pretty much the same, I used this one:
http://heavenlyhomemakers.com/high-five-recipe-creamy-mac-and-cheese
The idea is that the starch that's released from the noodles thickens the sauce and the milk makes it creamy and if you ask me, evaporation helps to make it thicken.

I filled up pot with milk, added the pasta, cooked it for 15+ minutes (pasta wasn't cooked after 15 minutes, I think it took more like 20 minutes for me). Didn't have shredded cheese, so tore up American Cheese Slices and added that, till it seemed thick and creamy enough.

So here was my take on it: Not bad, a little too sweet for me. Prefer my version which has a similar effect with less work and much faster.


Since this is similar to my version, I think I will stick to my version because a) I like it better and b) it's quicker (at least it seems like it-didn't actually time it to the second)

Stay Tuned for Part 2 with my version-coming soon-I call mine Macaroni with Cheese Sauce.


Posted by Unique Heart at Wednesday, November 14, 2012 No comments:

Scrambled Eggs with a Twist

Although the dish was delicious, I would put less turkish salad in next time. So the turkish salad was leftover in the fridge. I pulled it out and dumped it in the pan, let it heat up a bit, until it was sizzling, dumped the beaten eggs that already had salt and pepper in it and cheese in the pan. I was going to leave it as an omelet it would have been so pretty, but I realized the egg would get too cooked for me ( I like my egg just cooked), so I scrambled it. I'm also thinking I probably could have reversed the order I put in the ingredients. Posted by Unique Heart at Monday, November 12, 2012 No comments:

This Girl Is Different

What books have you read recently, that you'd recommend?
Posted by Unique Heart at Friday, November 09, 2012 No comments:

Do you know those pinterest fail blogs, the ones where they try pinterest pins and then let you know it didn't work. I actually thought I had also pinned this to try, but I couldn't find it on my board. Even though my pics are lousy, I don't think this was a fail. One of the comments on the fail blog, said that this worked for her, since people did have success with it, when I saw a family member cutting up pineapple, I cut one thin slice. The original instructions are here. I followed the instructions from there. They were a bit moist still too, so I could have probably dried them out a bit further-if I kept a close eye on them I didn't put it in a cupcake tin to dry overnight to get the flower shape, since it seemed to me that it wasn't a fail and was just testing technique, the flower was bright an pretty, although the edges did get a bit tan. Apparently it was also delicious. So I guess pinterest failers are lazy! 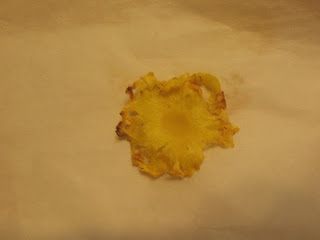 Posted by Unique Heart at Wednesday, November 07, 2012 No comments:

Hurricane / Tropical Storm/ Frankenstorm Sandy gave me the opportunity to try somethings, here's one and some more coming soon.

Are you in the mood of just one cookie? Hate spooning out each individual cookie-yeah that's the part I hate about cookie baking too.

This recipe lets you have 1 cookie in just a few minutes. This recipe doesn't beat my regular chocolate chip cookies, but it works for when you just want one cookie or something sweet quick. Out of the 5 people surveyed, including me, the following were the responses to this cookie (in no particular order):

Out of 5 people surveyed, no one thought it was bad. I had found the recipe over here. When I go to the original recipe, there are slight changes, for example it's a little less than 1/4 C flour and just mix everything in the cup. Although the second recipe may not have mixed everything in the dish because she used ramekins. Doing it the second way worked for me and people liked it, but it's possibly even better the 1st and original way, if and when I get around to trying it, I'll post it. Now someone just has to find me a similarly quick recipe to use that egg white and please don't say scrambled egg whites, macarons, or meringues unless they are like as quick as this recipe.

So here's the recipe:

from the original source.

Chocolate Chip Cookie in a Cup
created by Melissa at No. 2 Pencil

Start by melting your butter in the microwave. Add sugars, vanilla and salt. Stir to combine. Separate your egg and add the yolk only to your cup. Stir to combine. Add flour, then stir again. Add the chocolate chips, and give a final stir. Cook in microwave 40-60 seconds, start checking for doneness at 40 seconds. Mine takes 50 seconds. 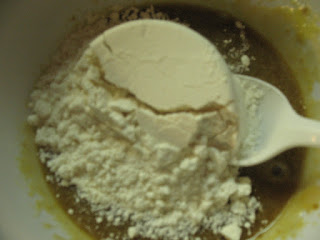 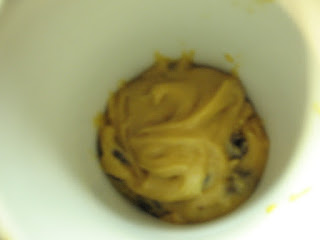 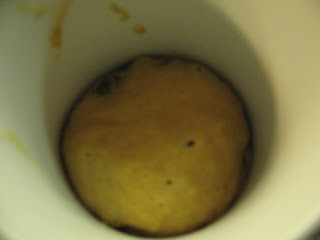 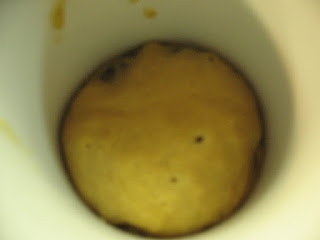 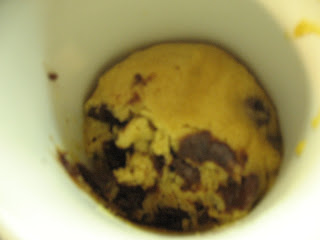 *UPDATE-I've since made this a few more times and given it to an additional taster. I've a learned a few things, the butter/margarine can explode when melting in the microwave, so do it for a few seconds at a time, and open the microwave door, I'm assuming it becomes like a pressure cooker. A quick google search shows that I'm not the only one having this problem, and maybe I should have warmed my butter/margarine first or let it at least come to room temperature. So one time, my margarine exploded all over, and I tried to make the recipe anyways, with that attempt I also just mixed all the ingredients together, not in the order it said, 'twas a failure. Then I made it again-had a slight explosion in the microwave-I think I opened the door just in time, didn't lose too much of the margarine, mixed things the way the recipe said, but (here it comes) forgot the brown sugar, I did take it out after 10 seconds in the microwave when I realized. But the cookie was already starting to bake, and therefore I couldn't add the brown sugar. It only took 40 seconds in my microwave, same time as the first ttime I made it. Results: Yummy (so don't worry if you forget that bit of brown sugar.)

I tasted a spoonful, and wanted more, but taster was intended recipient and wasn't sharing anymore. Taster was on the Yummy category.
Posted by Unique Heart at Monday, November 05, 2012 No comments: