Activity for a Rainy Day Or When You're Just Stuck Inside

We made up or found riddles online to use as clues. I took these riddles an put it in the order  I wanted them to be in. I then videoed different family members to say the clue, they were free to say it however they wanted to, they could say it in a funny voice, wear a mask, I didn't really care how they said it. I also ran through the house with the video camera videoing the different spots where the clues would be hidden. Since it was video based when they found the appropriate spot they would find a corresponding number to the number of the clue that they were up to that would allow them to resume the video-therefore they all just had a number and said resume video. Also make sure to tell them, that if they find any clues of a different number, they have to leave it there. They can't remove it until they are up to that number. The video started off with text that said a surveillance camera has been hacked and that we needed their help to solve the mystery. The surveillance camera part was there, just to give them hints as to where the to look for the clue-because the clues were challenging. There were screens that would say after each clue Pause Video and Solve. The last clue led them to the second activity of the day.

This took time, until everybody was happy with the design they chose, looked at the book for ideas, and found sayings/quotes they wanted to use. They also had to share the limited supplies.

We decorated t-shirts. I had found this book that came with materials to decorate clothing with and I thought they would enjoy. I have to say the t-shirts came out quite nice. The book came with stencils and I also bought some alphabet stencils, so they would be able to make their own saying or put their name on it. We also had some puff paint to use.

So go get some stencils-anything that strike your fancy. You can even make your own off the computer.
Just take a picture, adjust the size if you need to, you can do this in Microsoft Office Word. Print it out, and then cut out the picture using a utility knife (do this on top of scrap cardboard). This works best for very basic pictures.  Just to be clear I've provided an example. Let's say that the heart below is the picture you are using, you will be cutting out the black part.

You Will Need:
Fabric Markers
T-shirts (cheap solid ones)
scotch tape comes in handy
Alphabet stencils (preferably the cardboard ones you have to rip apart, I paid like 59 cents for mine, but you might want to get 2, just in case you need 2 of the same letter.
Other stencils

Optional
Puff Paint.
Fabric Paint.
other decorations you can think of

Plan out your design.
Lay out your t-shirt and slip a piece of cardboard in between the layers.
Align your stencils, scotch tape helps hold them in place while they color.
Color it 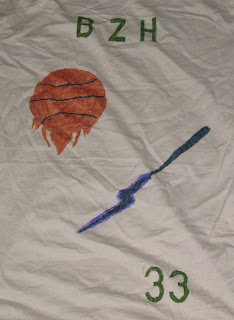 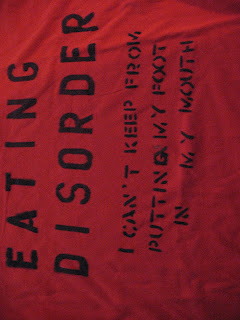 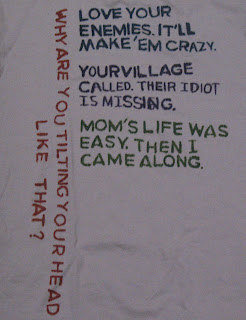 The owner of the puff paint t-shirt refused to let me take a picture of it, and this one had the most techniques on it. He used stencils for the words. Outlined one of the words with Puff Paint, this looks really nice, although puff paint should be the last step, to prevent the paint from getting ruined. Used a paint sponge to dab/sponge on paint for one of the words and he did some freehand drawing. His T-shirt came out really nice.

This is a great activity for many ages. Why are you still reading this?  Go get your supplies, to get started.

Have Fun and I hope to see your creations.

*And if you're still reading this, please let me know if you need something clarified.

Our first step was organizing and cleaning out the pantry. Do this with a piece of paper and a pen. Take your paper and divide it into columns. My pantry has four shelves, so I had four columns. Make sure your columns are labeled with each shelf number.
Anything that you will be placing back in the pantry gets written down under the correct shelf and with the quantity.
Once you have your list, open an excel document on your computer and list your items skipping a few rows between each item. (I did one page with the first 2 shelves and the next page with the last 2 shelves.)
Find pictures from Google images that match the foods in your pantry. Save these images in a folder on your computer. Next to each food name, insert the picture that matches. If you have more than one of the item, put that many pictures.
For example: If you have 3 Droste Cocoas on Shelf 4, it would look like this.
Shelf 4
3 Droste Cocoa

You can resize the pictures to fit on your page. The quantity number is optional.
*It's okay if not every item has a picture.
Once you finish, check that nothing is cut off in print preview. You may need to print out more than one page. Now even your little one can find something in the pantry.
Now let's say you finished up one of your Droste Cocoa, just make an x over it and if you decided to change the quantity, just update it.
Now, just tape it inside your pantry door.
You can use this same idea, but print out the food items as stickers or as my wonderful editor suggested make a velcro one, every time you finish one take it down, and when you restock put it back up.
I hope this has helped you.
What organization systems do you use (for any area in your house)?
Posted by Unique Heart at Sunday, April 03, 2011 No comments:

Look at this can: 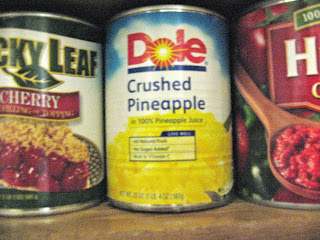 Yeah, the one in the middle.

Are you hungry yet?


Fooled ya, there's no pineapple in there. 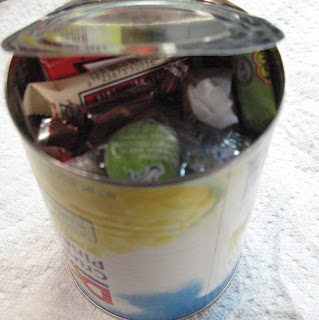 Did you guess candy? You got it, there's an assortment of candy in there.

I got this idea from another wonderful blog called Come Together Kids.

Here's how I made mine:

1. I picked out a can, it had to be a special can of course, and this can of crushed pineapples was the lucky one. 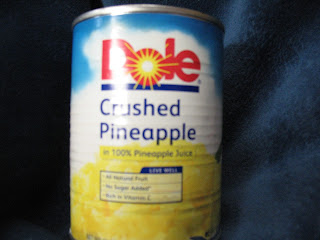 Oh, you want to know what's so special about this can. Alright, I'll tell you. 1. People in my house like it and 2. it has a tab. 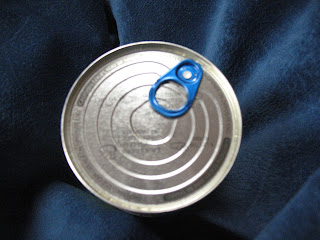 2. Turn your can upside down and use a can opener (preferably the safe one), although you could use a regular can opener, like I did. Leave the cover partly attached.

3. Empty the fruit into a bowl or a container, or give it to some kids who ask "Can I eat that?" 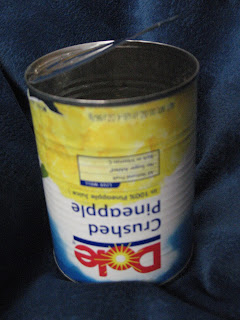 4. Rinse out the can very well.

5. Fill up with candy, or other goodies. 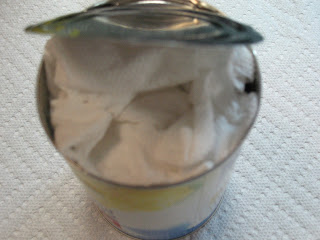 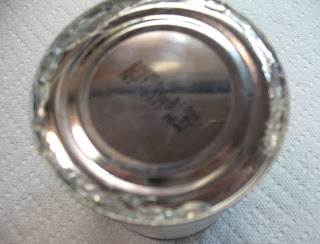 8. Turn it over, and who can tell that it's not pineapple. 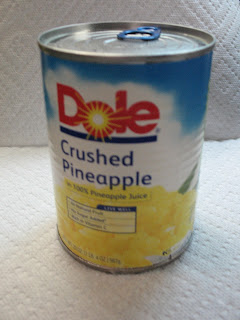 It sure fit in with the other cans in the pantry really well.

I can't wait to see the recipient's reaction when she opens it.
Her reaction: Why are you giving me a can of pineapple?
then she opened it, dumped out the contents and laughed.