Iced Coffee drinks are quite popular and I find are the first beverage to be gone at parties. Iced Coffee and water are 2 drinks you want to have plenty of. I've been trying out different variations of iced coffee. Some didn't make the cut. This one has a light coffee flavor, but it's still delicious.

When I make an iced coffee drink for myself, I usually just put in a tsp of instant coffee and 2 tsp sugar. Add hot water-just enough to dissolve the coffee and sugar granules. Stir it. Add milk. Now I usually put it in the freezer for a few minutes, so it gets nice and cold. I don't add ice because that would water down the drink.

* I used coffee liquor because that was what I had in the house.

I picked up that BPA Free Beverage Container you see above in a local store, and now carry it in my amazon store, and placed my iced cappuccino in there. So much more elegant than using the original milk bottle and it's a great size.

Tie Dye Without a Kit 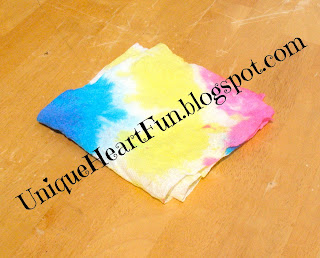 Have you ever wanted to do tie-dye, but didn't have a kit. You don't need one, unless you want something more permanent. It's easy. The picture below show a bounty napkin. I used leftover solution from the firework paintings.

1. Prepare dye solutions by mixing food coloring and water in your containers or see recipe below. Prepare a few colors.

2. Prep your garment by twisting it. The design that you see on this page was made by twisting it into a long rope and then I used two rubber bands to divide the garment into 3 parts. Note that it was a napkin so it was already folded before twisting.

3. Dip one rubber banded section into your first color. Repeat with your remaining sections.

5. Open up your garment

6. Heat the colors in the dryer. 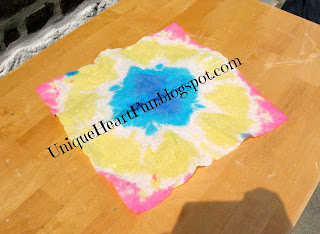 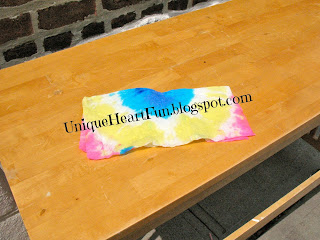 When you wash the item for the first time, put one cup of salt (just table salt will work) in your washing machine and use cold water. This will help set the dye. I wouldn't wash with other items 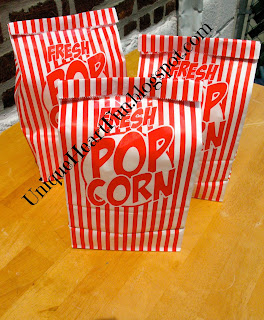 Place popcorn in brown lunch bag and press popcorn setting on your microwave.
I salted mine after popping.

Since not all kernels pop and you can't really re-pop them, I put in about an 1/8 cup of kernels. You can also add 1 tsp oil to the kernels before popping. Some people say the kernels pop better if the bag is placed upright in the microwave. I've been popping them with the bag on it's side. I either tape the bag shut or fold over.

After popping and salting the popcorn, we placed the popcorn in popcorn bags above and taped shut. I then surprised everybody with the popcorn when we went to the Despicable Me 2 Screening*.

*If the theater had rules about bringing in outside food, I wasn't aware of them and we would have been hungry as there was nothing kosher to buy.

Hi everyone,
I'm going away for a little while. I'm not going to have internet access for around 4 weeks starting on July 22. I'll try to schedule some posts to go up while I'm away, but am quite busy getting ready to go away, so if I do manage to get some posts up, they will be less frequent. Please continue to visit and maybe check out some of the past posts in the archives, or check out the new recommended reads feature.
Posted by Unique Heart at Monday, July 22, 2013 No comments: 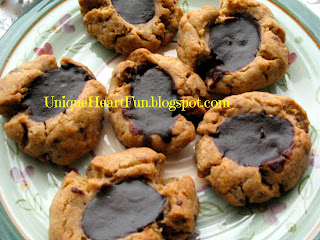 Mine cracked more than I think should be usual, but that might be because my brown sugar was kind of hard and lumpy. I think for the fudge it would work to substitute coconut oil to make it healthier and of course you can sub butter for the margarine. You can probably use any cookie recipe you would like and fill it with fudge. Please note that it does take a while for the fudge to set. Mine took a few hours. One of my siblings was so desperate for the fudge to set, he stuck it in the freezer. He doesn't recommend it, or maybe it just needed to cool down. They are said to freeze well, I personally don't have any experience with freezing them. They didn't last that long or make enough to freeze them.

Cream together the margarine and sugar. add the rest of the ing. and mix well to form a dough.
Roll into small balls and press down on the tray using your thumb (to make an indent)

Bake at 350F for about 15mins (until they can easily be picked off the tray) As soon as they come out the oven, using either your thumb or the back of a teaspoon measurer, indent the middle of the cookie again (to make a proper indent for the filing)

Cream together the margarine and sugar. add the rest of the ing. and mix well to form a dough.
Roll into small balls and press down on the tray using your thumb (to make an indent)

Bake at 350F for about 15mins (until they can easily be picked off the tray) As soon as they come out the oven, using either your thumb or the back of a teaspoon measurer, indent the middle of the cookie again (to make a proper indent for the filing)


Funny or non-descriptive names for food appeal to me. I'm the one who's often the first to try a Crazy Chicken Sandwich or a Monster Sandwich versus something with a more typical name. So when I saw Magic Cake, it automatically went onto my to try list. It's been on my to try list a while already. The reactions were varied. Some thought it was okay, others liked it and my mother 's whole face lit up and said, "Ooh milk pie, I love milk pie!" It turns out my grandmother used to make this but called it milk pie and my mother and grandfather used to eat it. My little brother wanted to know the real name of the cake, he thought we were joking when we said Magic Cake. That's what happens when you have an older brother who tells you everything's magic and is teasing. We told him that's what it's really called.
I'm not sure he liked it because he said it,"It doesn't taste like magic."
I asked him, "What does magic taste like?"
His answer,"Tingly."
I held back my laughter and made a  mental note to include pop rocks the next time I make or call something Magic Cake for this brother.

***We took some to my grandmother and asked her how she liked it and if it tastes like milk pie. She said, "better." So there you have it, it tastes even better than milk pie.

The magic in this cake is that it's one batter that separates into 3 layers. It's not a hard cake to make by any means. I sort of got 3 layers, my cake layer was very thin though.


All this recipe is making it's rounds all over the worldwide web, I wanted to describe my experiences making it.

I had to leave the eggs out of the fridge to get to room temperature-that took a while, but I went about my business in the meantime.

Then I basically followed the directions. I included some notes based on some research and my experience. You can find them at the end of this recipe.

Notes: You may want to add 4 drops of vinegar to the egg whites when beating them and to beat them last so they don't re-liquify.

It is important to place ingredients in the order that the recipe specifies.

It will look kind of lumpy and curdled, and you will probably not be able to get all of the egg whites in.

Do not worry if it looks like your batter separates while you are pouring it in to the pan. It's just the densities of each layer separating and re-arranging. It's really science-not magic. They will arrange themselves in the pan.

To make a 9x13 pan double the recipe.

Can use powdered sugar instead of regular sugar, might be less sweet.

If cake starts to crack lower your oven to 300 degrees.

I check on mine at the 40 min mark, I usually think it's still too jiggly then, so I leave it in for a little longer, it's usually slightly jiggly, but more set than jiggly. I know this is confusing, it's one of those recipes that are bit hard too explain and you need to experience it yourself to see what I'm talking about.

It's delicious cold too.

This cake should be kept in the refrigerator. 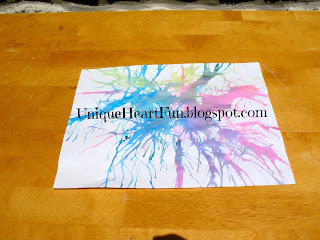 This is a simple craft that your toddler will enjoy and perhaps even your 12 year old. It really depends on your kid, but the age range that enjoys this craft is quite broad. It's quite appropriate for July 4th or as a rainy day activity. This craft can also be used to teach about color mixing. I only used 3 colors red, blue and yellow. My colors mixed when I was blowing and created purple and green.

You will need:
plain white paper, printer paper works well
food coloring, the simple one, not the gel ones that you use for cake and cookie decorating, although if you only have the gel ones, you can water it down and use those.
A  straight straw (not bendables) for each person-you can cut it down to size if you feel it's too big.
Paper Towels
Plastic Tablecloth-you're working with food dye, there is a potential to get messy.

1. Lay your plastic down to protect your work surface. Place Paper Towel's on top of the plastic, the towels will absorb any dye that is blown off the paper.
2. Give each child a paper and a straw.
3. Place drops of food coloring on paper and let children blow them all over the paper.
4. Let dry and hang up your child's wonderful painting.

*Use Glow In the Dark Mod Podge to make it Glow in the Dark!

* You can try this with watered down paint too, although it's not been tested yet.

*Please note that you can now find my blog on bloglovin due to Google Reader closing.