The Chicken Story or Knock Knock 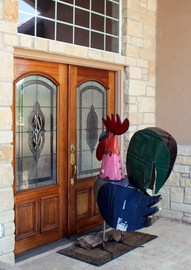 Knock Knock!!! This morning I had a fight with Victor about towels. I can’t tell you the details because it wasn’t interesting enough to document at the time, but it was basically me telling Victor I needed to buy new bath towels, and Victor insisting that I NOT buy towels because I “just bought new towels“. Then I pointed out that the last towels I’d bought were hot pink beach towels, and he was all “EXACTLY” and then I hit my head against the wall for an hour. Then Laura came to pick me up so we could go to the discount outlet together, and as Victor gave me a kiss goodbye he lovingly whispered, “You are not allowed to bring any more goddam towels in this house or I will strangle you“. And that was exactly what I was still echoing through my head an hour later, when Laura and I stopped our shopping carts and stared up in confused, silent awe at a display of enormous metal chickens, made from rusted oil drums. Laura: I think you need one of those. me: You’re joking, but they’re kind of horrifically awesome. Laura: I’m not joking. We need to buy you one. me: The 5-foot tall one was $300, marked down to $100. That’s like, $200 worth of chicken for free. Laura: You’d be crazy not to buy that. I mean, look at it. IT’S FULL OF WHIMSY. me: Victor’d be pissed. Laura: Yup. me: But on the plus side? It’s not towels. Laura: Yup. me: We will name him Henry. Or Charlie. Or O’Shannesy. Laura: Or Beyoncé. me: Or Beyoncé. Yes. And when our friends are sad we can leave him at their front door to cheer them up. Laura: Exactly. It’ll be like, “You thought *yesterday* was bad? Well, now you have a enormous metal chicken to deal with. Perspective. Now you have it.” Then we flagged down a salesman, and we were all “What can you tell us about these chickens?”, as if we were in an art gallery, and not in a store that specializes in last years’ bathmats. He didn’t know anything about them, but he said that they’d only only sold one and it was to a really drunk lady, and then Laura and I were all “SOLD. All this chicken belongs to us now.” (Insert-inappropriate-cock-joke-here.) So he loaded it onto a trolley, but Beyoncé was surprisingly unstable, and the giant 5 foot metal chicken crashed over onto the floor. And Laura and I were all “CHICKEN DOWN! CLEAN-UP IN AISLE 3″ but he didn’t laugh. Then the manager came to see what was causing all the commotion, and that’s when he found the very-conservative salesman unhappily struggling to right an enthusiastically pointy chicken which was almost as tall as he was. The salesman was having a hard time, and he told everyone to stand back “because this chicken will cut you“, and at first I thought he meant it as a threat, like “That chicken has a shiv”, but turns out he just meant that all the chickens’ ends were sharp and rusty. It was awesome, and Laura and I agreed that even if we got tetanus, this chicken had already paid for himself even before we got it in her truck. Then we got to my house and quietly snuck the chicken up to my front door, rang the doorbell, and hid around the corner. Knock-knock, motherfucker. Victor opened the door and looked at the chicken in stunned silence for about 3 seconds. Then he sighed, closed the door and walked away. Laura: What the fuck? That’s it? That’s the only reaction we get? me: That’s it. He’s a hard man to rattle. Victor was surprisingly pissed that I’d “wasted money” on an enormous chicken, because apparently he couldn’t appreciate the hysterical value of a 5 foot chicken ringing the doorbell. Then I said, “Well, at least it’s not towels” and apparently that was the wrong thing to say because that’s when Victor screamed and stormed off, but I knew he was locked in his office because I could hear him punching things in there. Then I yelled through his door, “It’s an anniversary gift for you, asshole. Two whole weeks early. 15 YEARS IS BIG METAL CHICKENS.” Then he yelled that he wanted it gone, but I couldn’t move it myself, so instead I said okay and went to watch tv. Then when the UPS guy came I hid, but he was all “Dude. Nice chicken” and Victor yelled, “IT IS NOT A NICE CHICKEN”. Which was probably very confusing to the UPS guy, who was just trying to be polite, Victor. Victor seemed more disgruntled than usual, so I finally dragged the chicken into the backyard and wedged it into a clump of trees so that it could scare the snakes away. Then I came in and Victor angrily pulled me into his office so that I could see that I’d stationed Beyoncé directly in front of his only window. And I was all “Exactly. YOU’RE WELCOME.” I told him that he could move Beyoncé if he wanted to, but he totally hasn’t. Probably because of all of the giant rocks I piled on Beyonce’s feet to dissuade burglars. Or possibly because Beyoncé is growing on him. Still, I can’t help but think that we wouldn’t even be having this argument if Beyoncé was towels. Honestly, this whole chicken is really a lesson in picking your battles more carefully. Plus, he’s awesome and I can’t stop giggling every time I look at him. Beyoncé, that is. Best. 15th anniversary. ever.
Posted by Unique Heart at Monday, September 26, 2011 No comments:

Slice a carrot in half crosswise and it's easy to see that the veggie resembles an eye—look closely and you'll even notice a pattern of radiating lines that mimic the pupil and iris. And the old wives’ tale is true: Munching on carrots will actually promote healthy eyes. "Carrots are filled with vitamins and antioxidants, like beta-carotene, that decrease the chance of macular degeneration, the leading cause of vision loss in older people," says Sasson Moulavi, MD, medical director of Smart for Life Weight Management Centers in Boca Raton, Florida. Photos by iStockphoto

The folds and wrinkles of a walnut bring to mind another human organ: the brain. The shape of the nut even approximates the body part, looking like it has left and right hemispheres. And it's no surprise walnuts are nicknamed "brain food"—according to Lisa Avellino, dietitian for Focus28 Diet, "they have a very high content of omega-3 fatty acids, which help support brain function." Photos by iStockphoto

Long, lean stalks of celery look just like bones—and they're good for them, too. "Celery is a great source of silicon, which is part of the molecular structure that gives bones their strength," says Dr. Moulavi. Another funny bone coincidence: "Bones are 23 percent sodium, and so is celery," reports Avellino. Photos by iStockphoto

The lightbulb shape of an avocado looks like a uterus, and it supports reproductive health as well. "Avocados are a good source of folic acid," says Elizabeth Somer, registered dietician and author of Eat Your Way to Happiness. "Folate has been found to reduce the risk for cervical dysplasia, which is a precancerous condition." Photos by iStockphoto and Shutterstock

The similarity between round citrus fruits––like lemons and grapefruit––and breasts may be more than coincidental. "Grapefruit contains substances called limonoids, which have been shown to inhibit the development of cancer in lab animals and in human breast cells," says Dr. Moulavi.Photos by iStockphoto and 3D4Medical.com

Slice open a tomato and you'll notice the red veggie has multiple chambers that resemble the structure of a heart. "Studies have found that because of the lycopene in tomatoes, there is a reduced risk for heart disease in men and women who eat them," says Somer. And, she adds, if you mix them with a little fat, like olive oil or avocado, it will boost your body's lycopene absorption nearly tenfold. Photos by iStockphoto and 3D Clinic

Red wine, which is rich in antioxidants and polyphenols, including powerful resveratrol, looks like blood. "When you drink it, you're really loading up on the healthy stuff that protects against destructive things in the blood, like LDL cholesterol, which can cause heart disease," says Somer. "There's also a blood-thinning compound in red wine, so it reduces blood clots, which are associated with stroke and heart disease." Photos by iStockphoto

Anyone who's ever reached for a glass of ginger ale when they’ve had a stomachache knows about the antinausea effects of ginger. So it's fitting that the herb somewhat resembles the digestive organ. According to Dr. Moulavi, "gingerol, which is the ingredient responsible for ginger's pungent scent and taste, is listed in the USDA database of phytochemicals as having the ability to prevent nausea and vomiting." Photos by iStockphoto

The oblong sweet potato bears a strong resemblance to the pancreas, and also promotes healthy function in the organ. "Sweet potatoes are high in beta-carotene, which is a potent antioxidant that protects all tissues of the body, including the pancreas, from damage associated with cancer or aging," says Somer. Photos by Shutterstock
from Woman's Day.

Posted by Unique Heart at Sunday, September 25, 2011 No comments: