I was asked to make something for a party specifically a dessert type item, but didn't really have much time. So cookies was out. Not saying that these were didn't take any time, but it was less time and easier than making cookies in some aspects.

I bought these Jumbo Piroulines also known as Presidor Cannoli 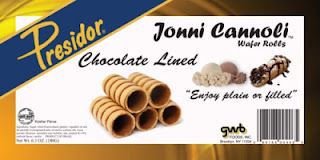 I used approximately 2 (maybe 3) boxes for one recipe, I bought 4 boxes not knowing how much the recipe would make.

2 lbs ricotta cheese-drained-you want it really dry, I squeezed it through a cheesecloth, then switched it to colander and let it drain for approx. 48 hrs in the fridge and then dried some more wet spots with a paper towel. Original recipe says to put in colander and drain overnight-mine wasn't dry yet, so I left it in longer, so more water can drip out.

Put cheese in bowl, add confectioner's sugar-no amount-it's too taste-some ppl like sweeter and some less sweet. Recipe calls for 1 Tbsp vanilla extract and/or amaretto liquor. I just put in vanilla. Optional: orange zest or lemon zest. Beat until creamy. Mix in some chocolate chips-also doesn't have an amount, you want to put in enough that there should be about 2, but no more than 2 chips in each shell.

Fill the shells, I used a spoon and the handle of the spoon to push it in, to eliminate air pockets.

I originally was going to pipe them in and make them look all fancy, but I realized they would get messed up on travel and I was running behind schedule as it was.

Optional: You can dip the ends into chocolate and sprinkle on nuts or other toppings. This is totally unnecessary, but just sharing the options.


These were all gone, not one left, my family didn't even get to taste, and it wasn't a huge party. I heard many people ask for these, and then for another one and yet another and another.

Posted by Unique Heart at Thursday, December 27, 2012 No comments:

A little while back, I posted about pizza pockets. Here's a fun take on those. Get out your cookie cutters,  and cut two of the same shape out. Spread one with sauce and then put on toppings. I would roll the dough out thinner next time, I was a bit rushed that day and also would use mozzarella cheese rather than American, hey I was using what was in the house. Top with the second shape using a fork to seal the edges. Bake until  a light golden brown, time will vary depending on your pizza recipe.  Yummy! Great for picky eaters. 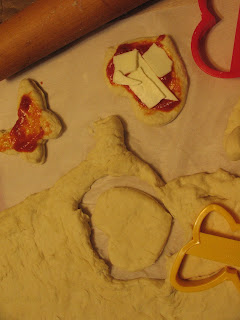 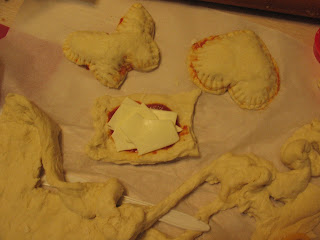 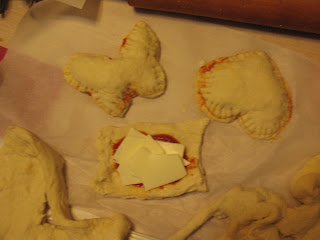 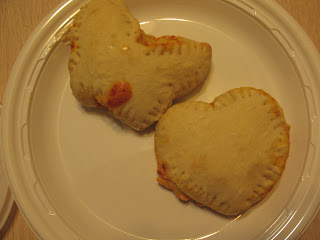 Posted by Unique Heart at Wednesday, December 26, 2012 No comments:


These potatoes are are awesome and look so pretty. The options are endless. Choose your herbs and mix on, go with whatever toppings strike your fancy. I will admit that I had a bit of a hard time, cutting the slits in the potato and making sure it didn't come apart. I've seen some tips that included holding a wooden spoon next to the potato, not under it when cutting, but the rest wasn't clear, so if anyone has any tips on how to cut it and keep it looking nice. Please share. Another tip, I saw included rinsing the potato under cold water to help it fan out. This possibly was helpful. Not sure though.

Thinly slice scrubbed potatoes making sure not to cut all the way through. I kept mine simple and brushed olive oil onto all the exposed potato and then sprinkled on salt. Bake at 350 for 1 hr.


I added some cheese when it came out and the heat of the potato melted it. Yep, that's how you do it, when you don't want overdone cheese.
Posted by Unique Heart at Tuesday, December 25, 2012 No comments:

At first I told you I couldn't quite place the smell of this perfume, but the description says it's a "luxurious blend of pomegranate & red osmanthus with a sexy surprise of vanilla rum, for a forever enchanting way to fragrance."

I still like the smell, still can't identify those smells, now that I know what's in it. I do like it though.

I sprayed it on my wrist and rubbed my wrists together. When I walked by my little brother, he asked if I was wearing perfume?

He responded back "Actually, I do."

I liked it and it doesn't irritate others, you know those obnoxious smelling perfumes, or the ones that close up your airways. That noxious stuff should be illegal.


Other reviewers did say that the smell wore off pretty quickly, mine lasted all day, I didn't have that problem.

I definitely recommend this perfume.


This perfume is sole exclusively at Bath and Body Works
http://www.bathandbodyworks.com


I received this perfume complimentary from Influenster as part of the Cosmo VoxBox program, all opinions are mine and are completely honest.

Posted by Unique Heart at Monday, December 24, 2012 No comments:

A small box came in the mail recently filled with wonderful surprises. 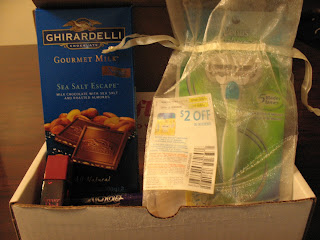 Pens always come in handy, but these pens are even more amazing, they have a rubber tip which erases using friction. They sent me one with purple ink and one with blue ink. I have used erasable pens in the past, and wasn't very happy with them. I was pretty happy with this one though. The ink is not as consistent as regular ink, meaning there will be parts where it's lighter. Also sometimes you may have to erase a little harder to completely erase. I also wish they had put the eraser on the cap because when I'm writing, I cap my pen with the pen cover and don't want to have to take the pen cover off, in order to erase. That being said, I would still recommend these pens.

Unfortunately, due to dietary restrictions this chocolate was a tease for me. I have heard Ghiradelli makes fabulous chocolate. I shared this with friends and this is what they said:

"A person can never have to much chocolate! Of all the chocolate i have even eaten, Ghirardelli Chocolate takes the cake. Their Sea Salt Escape chocolate felt so smooth on my tongue as it slipped down my throat. The smell was strong cocoa aroma and the taste was salty sweet. As i chewed the almonds the crunchiness of the nuts and the smoothness chocolate melted together. I enjoys licking my fingers as I finished the chocolate in  my hands."

Gillette Venus Embrace: These razors have the closest shave and minimize nicks.
Gillette Olay Razor: These lock in moisture and glide very smoothly.

I'm not really a perfume type of gal, but was pleasantly surprised by the light, non-overbearing pleasant smell that I can't quite describe from Forever Red by Bath and Body Works. I would totally recommend this scent.

Disclaimer: While all opinions are completely honest. I received these products complimentary from Influenster.
Posted by Unique Heart at Monday, December 24, 2012 No comments: